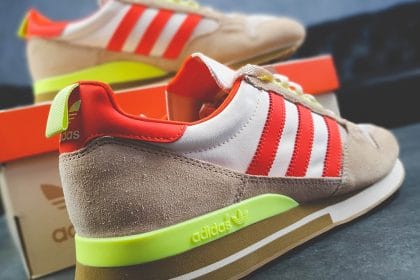 While the Twitter post remains the only tip to glean on, the likelihood of Adidas making its foray into the NFT and the growing world of the Metaverse is very high.

German multinational company, founded and based in Herzogenaurach, Germany, Adidas AG (ETR: ADS) could be close to partnering with popular non-fungible token projects, such as Bored Ape Yacht Club (BAYC), Gmoney and Punks Comic. This potential partnership with Adidas was teased by BAYC’s official Twitter account through a tweet featuring one of the unique monkeys, all dressed in Adidas tracksuits with the logos of Adidas, Bored Ape Yacht Club, GMoney and Punks Comic boldly printed on it. .

While the Twitter post remains the only tip to glean on, the likelihood of Adidas making its foray into the NFT and the growing world of the Metaverse is very high. The clothing design and manufacturing company entered into a partnership with Coinbase Global Inc (NASDAQ: COIN) last week as the company also acquired land in The Sandbox, as unveiled last week.

These indications validated the chances that Adidas could truly enter the metaverse as global brands explore avenues to capture the growing trend. The potential likelihood of Adidas partnering with these NFT icons was also raised by Gmoney, an NFT collector who rose to prominence when he paid 140 ETH for an NFT CryptoPunks earlier in the year. Gmoney also shared an all-black hoodie that had a wallet address imprinted alongside the logos of all of the major players believed to be part of the partnership.

No one knows what the actual partnership will look like yet, however, as a clothing brand we can see Adidas designing a limited edition outfit with the logos of these leading NFT brands. If details of the partnership are made public beyond current speculation, it will be known whether the outfits are billed to be available only to the respective NFT holders or to the general public.

NFTs represent a very unique innovation supported by blockchain technology. Essentially, they involve registering ownership of digital items on the blockchain as tokens and many projects have so far achieved massive ratings. Since the BAYC NFT project was launched earlier in the year, it has garnered over $ 800 million in sales, making it one of the most valuable NFT projects to date.

Beyond the high cost, however, investors are placing more emphasis on digital collectibles that open up access to other benefits beyond mere ownership. The BAYC partnership with Adidas is one such model, which is likely to set the right pace for other NFT projects today.

The Bored Ape Yacht Club team is particularly pushing new frontiers. As Coinspeaker reported earlier, the project signed an agency agreement with Madonna and U2 manager Guy Oseary to expand the reach of NFTs. Deals like this are set to increase the valuation of NFT BAYCs in the near future, a model that most NFT brands are likely to copy.