KRebles NFT, a Project Focused on the Preservation of Koalas, Will Go on Sale on Jan 15 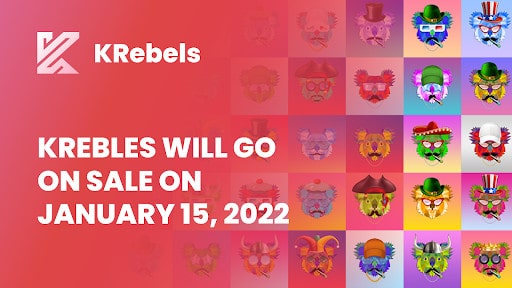 KRebels, an NFT project focused on the intersection of cutting edge technology, art and saving endangered koalas, has announced that its public sale will take place next January on its web portal.

The public sale of the KRebels NFT allusive to koalas will take place on January 15, 2022 at 22:00 UTC, on its website, where users will be able to strike any of the 9,999 Koala NFTs of the Ethereum blockchain available for sale.

With widespread industry adoption predicted by 2023 and the potential to generate nearly $ 3.1 trillion in new business value by 2030, blockchain technology has the potential to create, alongside decentralized metavers, a new economy that will push back the boundaries between the physical and virtual worlds.

KRebels will have a leading role in this emerging new economy, beyond the hype behind NFTs. The reality is that the future is already here and we would like to claim our place there as a truly new concept in the industry.

KRebels is a project that aims to raise awareness of endangered species such as Australian koalas, which were severely affected by the 2020 wildfires.

The Red List of the International Union for the Conservation of Nature, the authority on the conservation status of species in the world, assures that the koala population is declining and, therefore, it is vulnerable to extinction.

In 2016, experts estimated a population of around 330,000 koalas, which was an average decrease of 24% in population from the previous three generations.

KRebels is the first project to use non-fungible tokens (NFTs) issued via blockchain technology to raise awareness of the dangers inherent in climate change and its devastating effects on vulnerable species such as Australian koalas.

9,999 works of art tokenized on the Ethereum blockchain inspired by koalas are part of the theme of this collection presented by the KRebels Project, in order to generate the necessary resources to support the foundations in charge of saving these species, at the same time as awareness in the crypto community in love with digital art.

Regarding the public launch of the sale of koala NFTs, the creator and CEO of KRebels stressed that “the public sale of our NFTs is an important step in raising awareness about the conservation of these and other similar species that are found in danger of extinction. , and the power that blockchain technology has to help them ”.

KRebels is a pioneering NFT project focused on the intersection of cutting edge technology, art, and the conservation of endangered koalas.

KRebels uses cutting edge technology to raise awareness for a good cause. KRebels’ in-house artist has created 9,999 different koala-inspired artworks that are turned into unique NFTs on the Ethereum Blockchain.