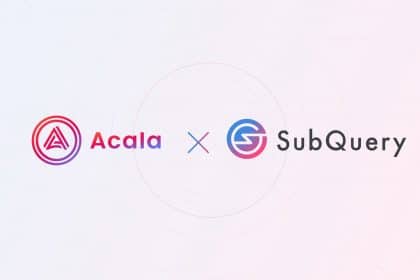 With Acala’s EVM +, users will be able to link their Ethereum addresses to their Polkadot addresses, overcoming the need to manage multiple accounts while accessing the SubQuery network.

SubQuery Network, a decentralized data aggregation, indexing and querying layer between Layer-1 blockchains and decentralized applications has announced its intention to launch on the Acala parachain, breaking the record for the first external application to be launch on the latter since it won the parachain auction on the Peas blockchain earlier this month. As stated in a press release shared with Coinspeaker, the SubQuery protocol and its native token, SQT will launch in early 2022.

Acala was celebrated for winner the first parachain auction on the Polkadot blockchain, leveraging its strong community. Recognition of the superiority of the technology wielded by the Acala Network has seen more than 81,000 people pledge over 32 million DOT tokens to help the protocol win the slot. The strength of the Acala community emerges as one of the top three reasons the SubQuery team said they chose to pitch tents with the protocol. The other two factors include domain / technical excellence and its existing strong relationship.

“We have ambitious growth plans, but our house will always be Polkadot. By partnering with Acala, the best DeFi platform on Polkadot, we have absolute confidence in their ability to help us not only in our token launch, but also in future areas such as micropayments for indexers on networks. Said Sam Zou, Founder, and CEO of SubQuery.

According to the SubQuery Network, Acala’s plans to launch its EVM + bridge are also a good factor that influenced the choice of protocol. The proposed EVM compatibility will allow SubQuery to extend the reach of its Token Generation Event (TGE) to investors outside the Polkadot ecosystem, as users can easily log into the event using Metamask or other native wallets backed by Ethereum.

With Acala’s EVM +, users will be able to link their Ethereum addresses to their Polkadot addresses, overcoming the need to manage multiple accounts while accessing the SubQuery network.

The partnership between SubQuery, which will provide indexing solutions for applications based on the Polkadot Acala network, is centered on promoting the decentralized nature of the larger ecosystem.

Both projects have a history of collaborating on initiatives that help promote Polkadot’s decentralized nature. Some of the duo’s collaborations include a joint hackathon with Encode Club and leveraged Acala subquery projects that dynamically track data created on Acala and Karura.

“Acala will act as a DeFi hub for Polkadot and a landing platform that aggregates assets and liquidity from a variety of blockchains. We are delighted to be able to continue our close relationship with SubQuery and launch the SQT token and SubQuery smart contracts on our platform, ”said Bette Chen, co-founder of Acala.