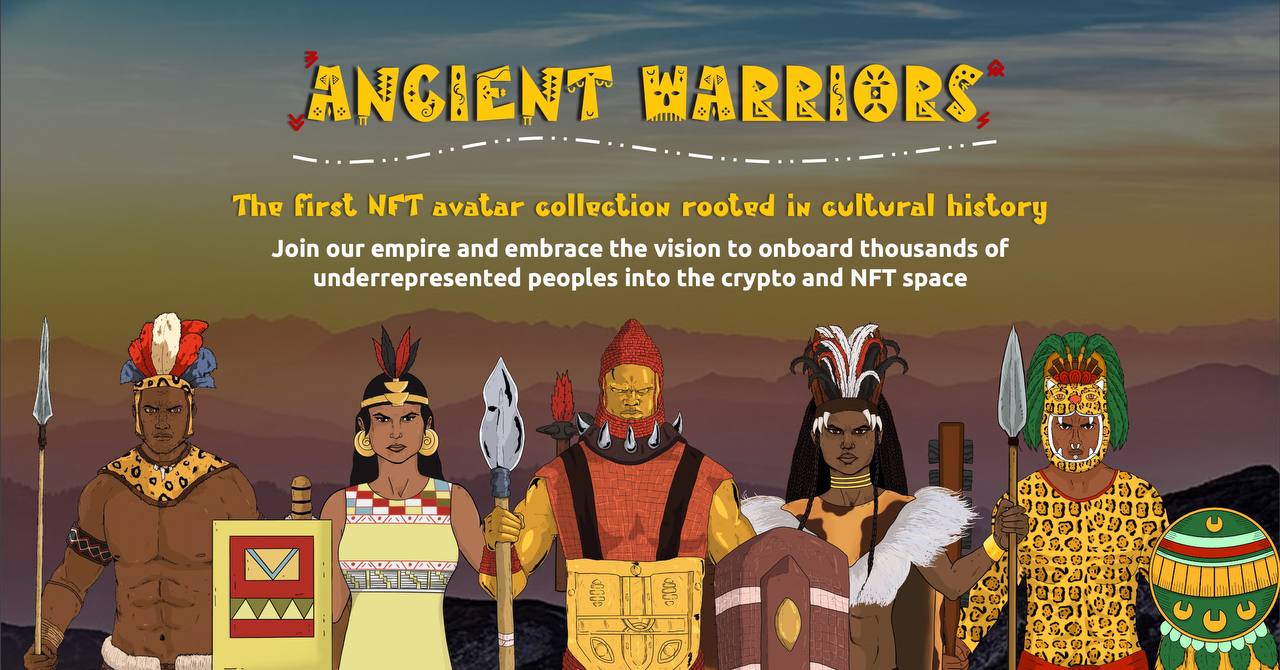 
The Ancient Warriors Empire is a collection of 4,444 fierce warriors from the great African and Latin American empires. We are the premier collection of profile photos focused primarily on cultural history.

The mission is to integrate under-represented communities in Web3.

Who is building this and why?

The vision first took root in the minds of two of our founders who are best friends who went to school together at Princeton University. As Nigerian and Ecuadorian Americans, they bonded strongly about how African and Latin American cultures are repressed and distorted in mainstream media and technology.

The founders created tech startups in their respective countries. They discovered the past empires in these lands and marveled at the heights reached by these civilizations. They decided that if it had been done before, it could be done again. Thus, Ancient Warriors was born to highlight the greatness of our cultures and the cultural riches that have been hidden over the centuries. We embrace the Warrior mindset, building the strength to replicate and reimagine this past greatness.

Where does Web3 come into play?

The remains of these empires serve as reminders and building blocks for us to achieve what our ancestors did. Although their relics and precious cultural artifacts are currently in Western museums of the physical universe, the philosophy of the ancient warriors is that we can literally bring them back to the metaverse through our NFTs.

There is very little chance in history that a massive redistribution of wealth could occur; we think the cryptocurrency revolution is one of those times. Ancient Warriors is building a decentralized, new-age empire of under-represented peoples to ensure that all communities can benefit from the opportunities within Web3.

How are under-represented communities received?

Currently, there is very little ethnic representation in the NFT and the Web3 space as a whole. Most people of color find it difficult to engage in this industry because no place has been carved out for us.

We solve this problem by designing mainly based on this ethnic representation. 3 artists merged a mix of African and Latin American styles to design over 200 strokes, each unique to a specific combination of culture and genre. From there, each NFT is programmatically generated.

Almost all of our traits have been derived from historical research. In this sense, we artistically illuminate cultures that are currently under-represented in space and form around it a community open to all. The collection is like a virtual museum – a museum for us and by us.

Where are things now and when is the launch?

The technology is complete and tested with the majority of our design work. We are focused on marketing and community building as we prepare for the launch in December.

The community grew organically without paid marketing, and we conducted several immersive themed activities, such as a scavenger hunt, while also contributing to broader conversations in the Web3 space.

What is the roadmap?

To those in the community struggling to find a place for themselves in this space: Ancient Warriors is assembling a legion to guide and support you in the emerging new world. Join Ancient Warriors as they build the great empires of tomorrow.